The Fallacy of Progress

A working definition of progress is: economic growth, improved technology, and the American Dream. Specifically beginning in the later 195h century, progress often refers to an age of steel, gold, coal, petroleum, cotton, steam, and electricity.

Starting in the 1970s fads in popular culture resulted in the phrase "you can't stop progress" being invoked frequently. Usually the phrase referred to real estate development and/or gentrification. Such as: "A new building is going up after the old building was knocked down. You can't stop progress." Even this casual usage is based upon assumptions that technical change and economic growth are a priori beneficial, which is clearly not the case. Refer to appendix below "Usage History of the Expression You Can Not Stop Progress."

The appeal of novelty is sometimes used as a justification for belief in progress, either consciously or unconsciously. Refer to the appendix below "Appeal to Novelty Fallacy"

The elements of fallacy in progress were well expressed by Issac Newton in his Third Law of Progress Motion:

For every event deemed to be progress, for each aspect which can be construed as an advantage, there is an equal and opposite disadvantage.

Progress Case Study: The Milkman Era vs. The Supermarket Era

Process: A wire metal carrier would reside permanently on customer's porch. In some cases the metal dairy carrier would reside in an insulated dairy-supplied box. Once or twice a week, generally early in the morning, the milkman would deliver the product in the metal carrier and/or swap the current carrier for a new carrier. The delivery would generally be a standard order plus or minus custom items, often specified on a cardboard order sheet also in the carrier. Milk was delivered glass bottles, sealed with a little waxed foil The milkman would pick up empty glass bottles at the same time as delivering new product. The dairy would clean the empty bottles and reuse them. A specific dairy employed the milkman, created the products, packaged the products. Billing was usually monthly.

Disadvantages: Process is limited to the products produced by a specific dairy. Require the customer interacts with a product specific vendor. Product needs to be brought inside to refrigerator before spoilage occurs. Infrastructure requires a substantial number of local dairies, each the the center of a certain delivery radius. Suburban sprawl was an anathema to dairy home delivery.

Process: Fewer larger dairy farms produce the raw product. In some cases milk is trucked in refrigerated trailer to a processing facility. In other cases the processing facility in in the same location as the dairy farm. Products are centrally packaged into either wax cover cardboard or plastic containers. Packaged dairy produced delivered in bulk to super marker. Customer purchases dairy products at supermarket along with other food products. Containers either enter landfills or arrive at recycle centers.

Advantages: Economy of scale for dairy farm, dairy processor and supermarket. Enhanced customer convenience of one-stop super market for most products, including dairy. No need for customer to interact with product specific dairy vendor.

The efficient and ecological sound dairy-milkman-customer process is appealing. IN a vacuum, the milkman system is net superior to the supermarket. system for diary products. However, systems do not exist in a vacuum which makes these systems close to a drawn However, even at a draw, change and technical "progress" as represented by the supermarket era is not beneficial to humanity.

Disadvantages: Nothing is perfect.

Redevelopment of real estate accounts for the plurality of usage for the phrase "you can't stop progress." The new development has a different set of trade-offs compared to the extant development. The redeveloped product is not more beneficial to humanity compare to the extant product. The before and after states in this case study presents a situation where advantages and disadvantages balance each other. Change and technology are not necessarily beneficial to humanity.

The net human advantages of internal combustion and electric vehicles exceed human disadvantages, at least in the short term. Even with a net improvement in some aspects of the human condition, long term effects of massive industrialization prove to be net advantageous. Change and technology are not necessarily beneficial to humanity.

Investigation may prove these claims to be true, but it is a fallacy to prematurely conclude this only from the general claim that all novelty is good.

The appeal of novelty is sometimes used as a justification for belief n progress, either consciously or unconsciously.

Appendix: Some Dictionary Definitions of Progress

Difficulties with progress as of the late twentieth century:

Appendix: Usage History of the Expression "You Can Not Stop Progress"

Ngram history of the phrase "you can not stop progress." Expression became widely used starting in the 1970s. 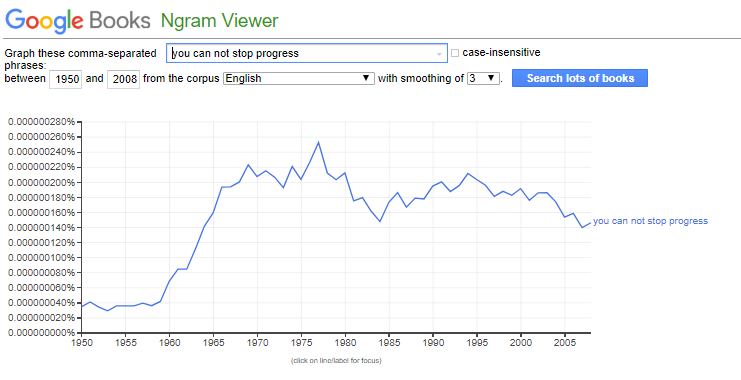 Quintessential aspects of mid-twentieth-century life that are disappearing forever:

Coontz, Stephanie. The Way We Never Were: American Families and the Nostalgia Trip. Basic Books, 2000.